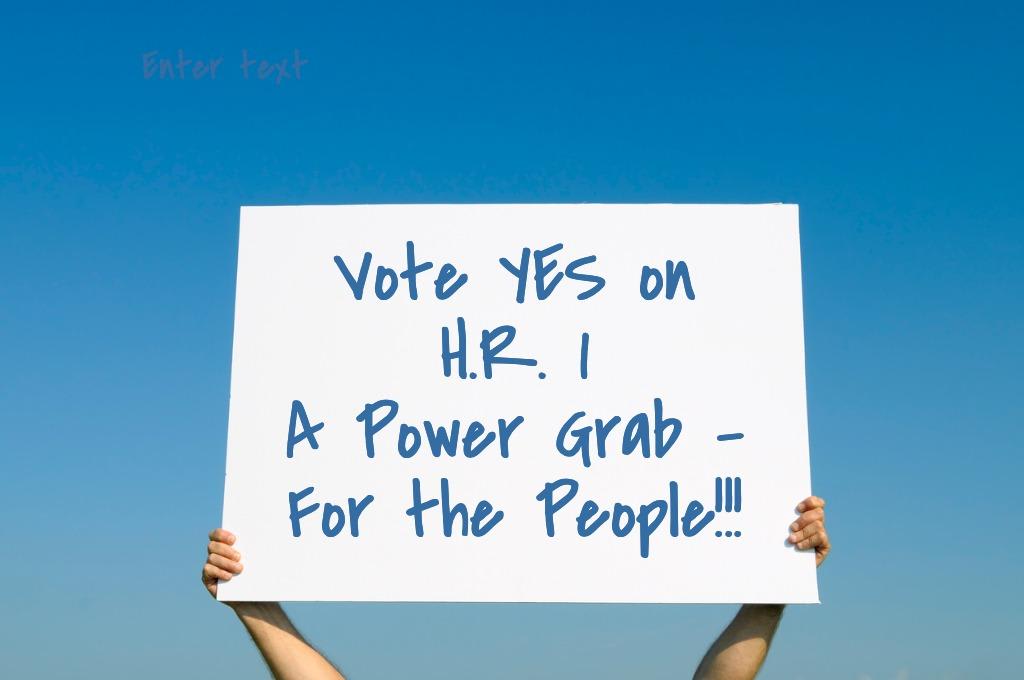 UPDATE: The Vote on H.R. 1 “For the People” Happening FRIDAY

Democrats in the House of Representatives will vote this Friday, March 8 to pass their top legislative priority -- H.R. 1, the For the People Act, the most comprehensive and sweeping package of anti-corruption reforms since Watergate. It aims to fix America's broken and corrupt political and campaign finance systems.

Mitch McConnell calls H.R. 1 a “power grab”. We agree with Alyssa Milano -- it’s a Power Grab For the People!

Alyssa understands that H.R. 1 will restore power to the people.

“Lobbyists, special interests and the politicians who benefit from the current system are calling this a partisan power grab. They’re wrong.

Join Alyssa and Future Majority. Contact your Member of Congress today & tell them you support the Power Grab For the People! Tell them to Vote YES on H.R. 1.

The For The People Act has three core tenets:

It will rein in the influence of the unlimited secretive and unregulated dark money that has a corrosive effect on American political campaigns and our democracy. It will expand the prohibition of foreign political donations. It will make voter registration automatic, bring an end to partisan gerrymandering with independent redistricting commissions, require that Super PACs and secretive "dark money" political groups make their donors public, and force the release of presidential tax returns.

Republicans are opposed to H.R. 1. So who’s really working to “Drain the Swamp?” Democrats.

Donald Trump campaigned on a promise to “drain the swamp” but his unprecedented personal and presidential corruption has only made Washington more swampy. And he’s empowered the ultimate swamp creature Mitch McConnell who’s attempting to block the Senate from taking up the anti-corruption reform package, calling it a “power grab” and willfully ignoring the close to 80% of Americans that support reducing the influence of special interests and corruption in Washington.

The truth is Democrats are the real force working to drain the Trump swamp, root out corruption, restore people’s faith in government and protect American democracy. The For The People Act has 236 Democratic co-sponsors that want to restore integrity to government and make sure people know that their government works for the people -- not the special interests.

Where are the Republicans that want to drain the swamp? Or is the GOP firmly now the party of corruption, special interests and dark money?

Contact your Member of Congress today and tell them to vote YES on H.R. 1 on Friday. Tell them you support the Power Grab For the People!