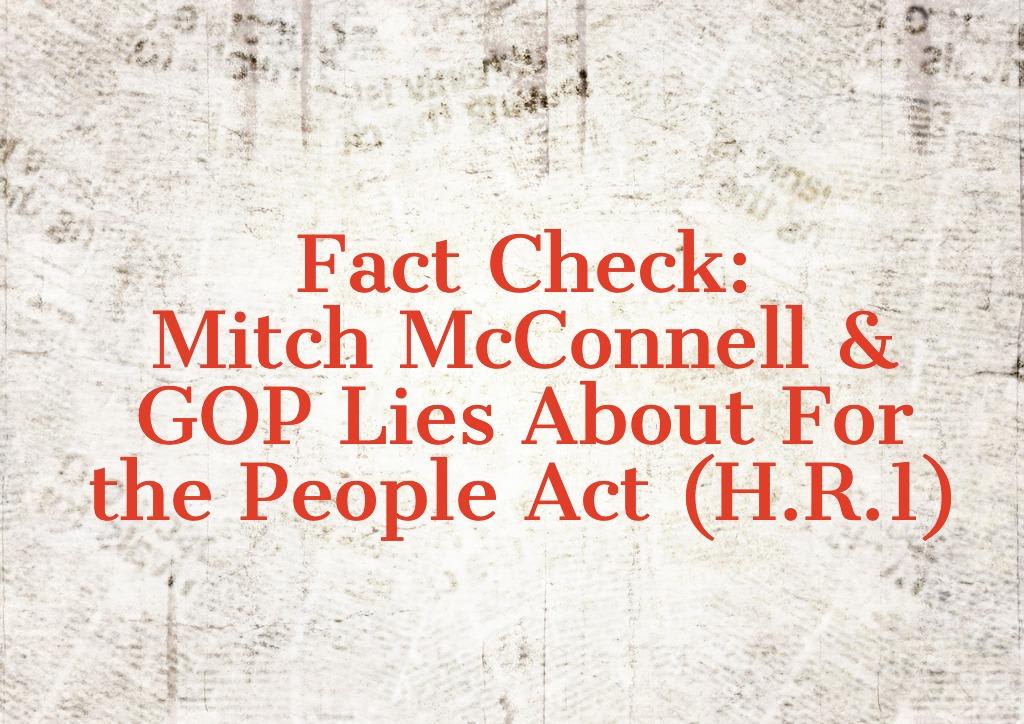 Fact-checking Mitch McConnell and GOP Lies About the For the People Act (H.R.1)

Do You Support the For the People Act?

At Future Majority, we keep a list of the outright lies and distortions Mitch McConnell and the Republicans tell about the sweeping anti-corruption For the People Act (H.R. 1), which passed the House almost ten days ago. It is getting pretty long.

In normal times, after passing the House, the bill would then move on to the Senate for consideration. But Senate Majority Leader Mitch McConnell (R-KY) has said he will not let the For the People Act have a vote in the Senate -- effectively killing the bill and any debate about it.

When asked by a reporter why, Mitch said, “because I get to decide what we vote on" then laughed.

The For the People Act is the most aggressive anti-corruption crackdown in a generation; the biggest attempt to clean up Washington since Watergate.  It is so comprehensive, we like to call it the Drain the Swamp Act. Doesn’t that sound like something Republicans pretended to support just recently?

McConnell and the Republicans are running scared. Draining the swamp of corruption dries up their lifeline to unregulated dark money and corporate special interest cash that floods the swamp. That money keeps them fat, happy and re-elected.

Republicans are hard at work with these secret donors, conservative lobbyists and corporate special interests to kill the bill by lying to the American people about what For the People Act does.

Don’t Buy Their Lies. Here’s a fact check on just a few of them:

The Facts: Wrong. No, it does not. For the People does propose to make Election Day a federal holiday, require states to automatically register eligible voters and create independent commissions to oversee redistricting. It is illegal for noncitizens to vote in our elections and H.R. 1 does not seek to change that - period. (Source: Factcheck.org)

The Facts: Wrong. H.R. 1 proposes a public financing system for congressional campaigns with the specific goal of reducing the role of big money in politics - including the unregulated “dark money” and secret donors that corrupt our political system.

It forces Super PACs to disclose these secret donors so you - the people - know who’s behind the massive unregulated money flowing into our elections.  And H.R. 1 will force social media platforms like Facebook and Twitter to disclose how much money is spent on and who pays for the dark money political ads on their platforms.

Money for the public financing for congressional campaigns would come from a surcharge on federal settlements made with banks and corporations that break the law. It would set up a federal matching system that would match small dollar donations by everyday Americans at a 6:1 rate. This empowers the American people.

McConnell/GOP Claim:  H.R. 1 is a power grab for politicians.

The Facts:  Wrong. House Speaker Nancy Pelosi (D-CA) says it best: “Yes it is a power grab - a power grab on behalf of the people.”

We’ll keep fact-checking the lies McConnell and the GOP are trying to feed you. This fight is worth it.

Do you support H.R.1?  Tell us and tell your lawmakers For the People deserves a vote in the Senate.