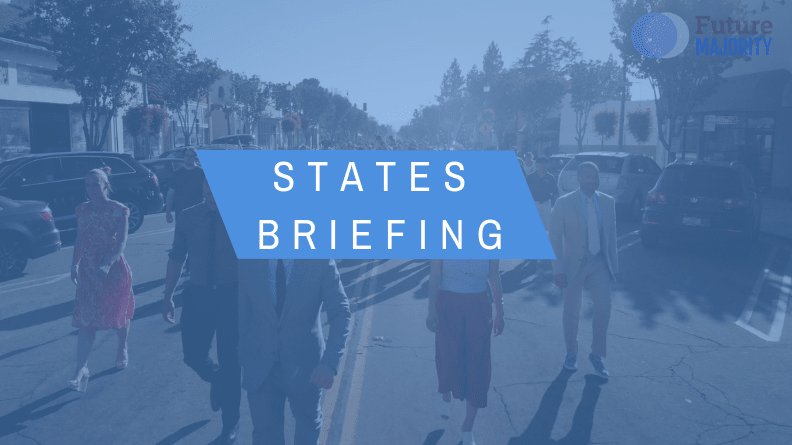 Three things to know this week that happened outside the Beltway:

•Wisconsin Dan Kaufman’s book “The Fall of Wisconsin: The Conservative Conquest of a Progressive Bastion and the Future of American Politics” (Norton), looks at the state’s shift from blue to red in 2016 as part of larger shift rightward that had been long simmering at local level and statewide. The move away from the state’s deep tradition of progressive populism was driven by many factors, including a growing resistance to unions, suppressive voter ID laws, district maps, and End Citizens United that allowed for a flow of unrestricted conservative money in to the state. Kaufman writes that the rightward shift has also made Wisconsin a model for conservative activists with the backing of corporate money. (link)

•Republican Congressman James Comer from Kentucky made critical comments about Gov. Matt Bevin and the planned aluminum mill his friends at Braidy Industries plan to build with the help of $15 million in state money and $200 million from Russian company Rusal. The plans have raised eyebrows given Rusal was under U.S. sanctions until they were lifted by the Trump Administration – a move supported by Sen. Mitch McConnell. Rusal is partly owned by Russian oligarch Oleg Deripaska who is still under sanctions. (link)

Elsewhere in the states:

•The Florida Insider Poll of More than 175 political operatives, insiders, and political scientists in the state finds that 70 percent think Pennsylvania and not Florida will be the key battleground state in 2020. Those surveyed point to Trump being the first Republican to carry the state since 1988, yet the state elected a Democratic governor two years later. They also believe Democrats will spend more money in Pennsylvania because they’ll need the state to win the presidency in 2020 and can win it without Florida. Those surveyed also said that if Trump moves forward with allowing offshore oil drilling in the Gulf of Mexico, it could tank him in the state in 2020. (link)

•Marking the first time the Michigan’s two state party chairs have been simultaneously helmed by women, Democratic Party Chair Lavora Barnes and Republican Party Chair Laura Cox look to 2020. Cox acknowledges Trump can be a turn off to the very demographic on which she’s most focused – white, suburban, college-educated women – as she seeks to not only win the state for Trump, but also retake two House seats that flipped to Democrats in 2018 and ousting Rep. Gary Peters. Barnes vows to avoid a repeat of 2016 when Democratic votes were down nearly 300,000 from the 2012 presidential election. (link)

•Even the Russians know how critical Michigan is in presidential politics, as evidenced by the Mueller Report which details a meeting in which Trump campaign manager Paul Manafort discussed with Russian operative Konstantin Kilimnik the campaign’s internal messaging and polling, along with their plans to focus on the key Midwest states of Michigan, Pennsylvania, Minnesota and Wisconsin. (link)

•It appears the longtime swing state of Ohio has stopped swinging. Although the state’s becoming more diverse, it remains whiter than the national average and has a lower percentage of residents with a bachelor’s degree. Ohio State University professor Paul Beck attributes the growing strain of conservatism in part to the loss of industrial jobs in the northeastern part of state. Political analyst Kyle Kondik, author of “The Bellwether: Why Ohio Pick the President” says the swing state status has diminished in part to the significant population of white working class voters in the state that are increasingly Republican. Kondik also looks at the “presidential deviation” to “calculate how far states deviate from the national popular vote in a presidential election” and in 2016 after years of voting close to the national popular vote, Ohio shifted 5 percentage points to the GOP, the largest deviation since 1932. (link)

Tell us what’s happening in your state. Email us at political@futuremajority.org.