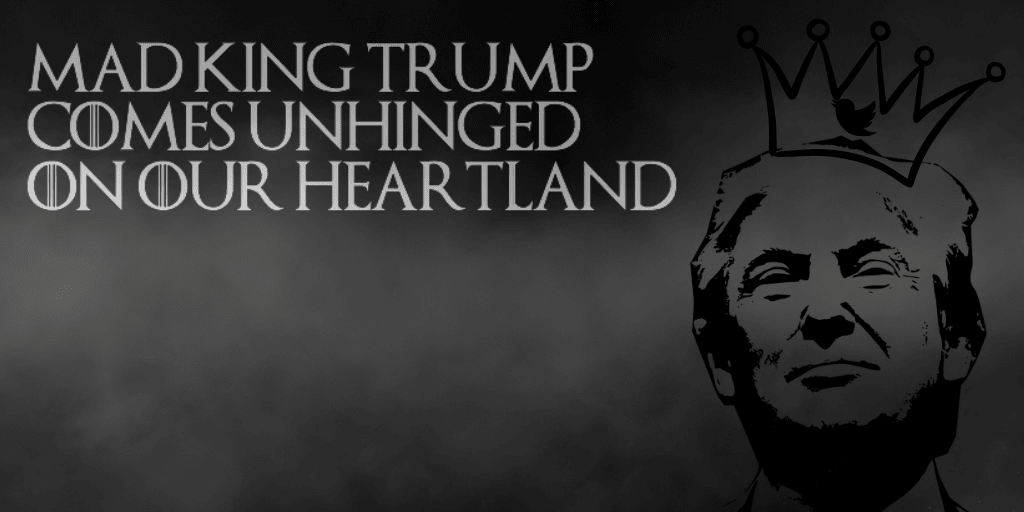 Are you ready for Game of Trump to end?

Mad King Donald J. Trump of the House Swamparyen, the First of His Name, King of Debt, the Obstructionists and the Con Men, Man of the Outer Boroughs and Protector of His Ego, Man of Fake Billions, King of the Golf Cheaters, Leader of the Racists, the Combovers, Breaker of Contracts and Father of Grifters.

The unhinged Mad King remained atop his Tariff Dragon today, breathing fire upon and laying waste to American consumers, manufacturers and farmers from Wisconsin and Kentucky to Arkansas and Iowa.

In fact, Mad King Trump's tariffs are to the American heartland what Mad Queen Daenerys' dragon was to Kings Landing.

Unable to admit a mistake and completely ignorant of what tariffs actually are, the unhinged Mad King’s continued escalation of a trade war with China has resulted in nothing for the United States except a nose-diving Dow Jones industrial average, increased prices for American consumers, and retaliation from China, which will impose steep tariffs on $60 billion in U.S. goods entering the country.

Wall Street is Freaking Out.

The Dow dropped more than 700 points this morning as Wall Street grew increasingly scared that the Mad King’s standoff with China could threaten a global economic crisis. And we learned Monday afternoon, that Dangerous Donald is planning to meet with the Chinese and Russian presidents in Japan at the G20, and we know how much he likes to flatter and be flattered when he’s in the company of autocrats and dictators. Who knows what he’ll give away this time?

If Trump stays on this reckless and foolish path, Americans will continue to see higher prices at the grocery store, at big box retailers and other places where they purchase everyday goods made in China.

The bottom line - the Trump tariffs are a tax increase on the very people that elected him. As the conservative journalist Jennifer Rubin asked in today’s Washington Post, “How much pain is Trump going to inflict on those who elected him?”

And we haven’t even mentioned the collision course the Mad King has set the United States on with Iran.

From trade to diplomacy, Mad King Trump proves daily he’s incapable of doing the job and that he doesn’t care one bit how many Americans get hurt by his backwards policies.

From lackluster tax cuts for the middle class, to higher health care costs for everyone, tariffs causing prices to jump for everyday goods...the Mad King’s reign of terror continues and we're ready for the Game of Trump to come to an end.