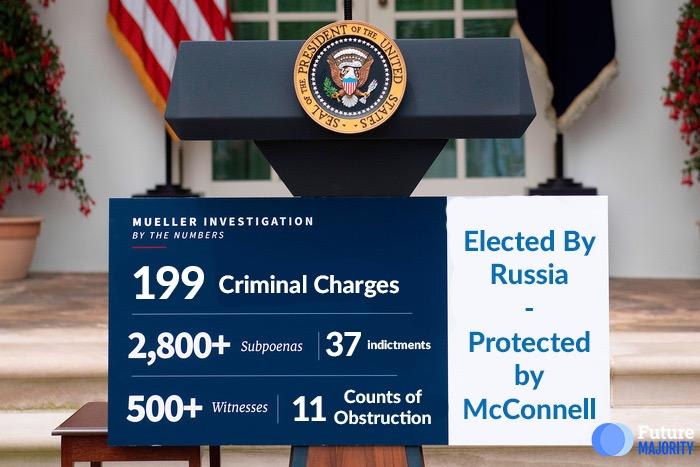 Mueller’s Statement Further Demonstrates the Need for H.R. 1 - For the People.

Call your Senator today and tell them H.R. 1 Deserves a Vote in the Senate - Now.

In his first public comments since the beginning of the Russia investigation, Special Counsel Robert Mueller today refused to exonerate Donald Trump of criminal obstruction of justice.

And Mueller underscored the critical need to address the “systematic influence” by Russia that was welcomed with open arms by the Trump campaign.

That’s why you need to call your Senator now and demand a Senate vote on H.R. 1 - the most sweeping piece of anti-corruption legislation since Watergate.

In short, Mueller put a spotlight on the rampant corruption and criminality that started during Trump’s presidential campaign in 2016 and continued at an alarming pace once he was in the White House.

It’s clear that Trump welcomed help from Russia to win and now he’s being protected by Mitch McConnell who has refused to call H.R.1 -- the For the People Act -- for a vote.

So Trump was elected by Russia and now he’s protected by McConnell. Wow.

House Democrats unanimously passed H.R. 1 the For the People Act earlier this year and Mitch McConnell will not schedule a vote.

Call you Senator now and demand that the Senate vote on H.R. 1 - the For the People Act.

While H.R. 1 would not have prevented all of the Russian influence and shenanigans of the Trump campaign and White House, it certainly would help prevent such corruption in the future.

And it would stop the flow of foreign money into U.S. elections (we’re looking at all you $7 million in oligarch cash, McConnell).

Call your senator and DEMAND a vote on HR1 in the US Senate. It’s time to clean up Washington and protect our Democracy.