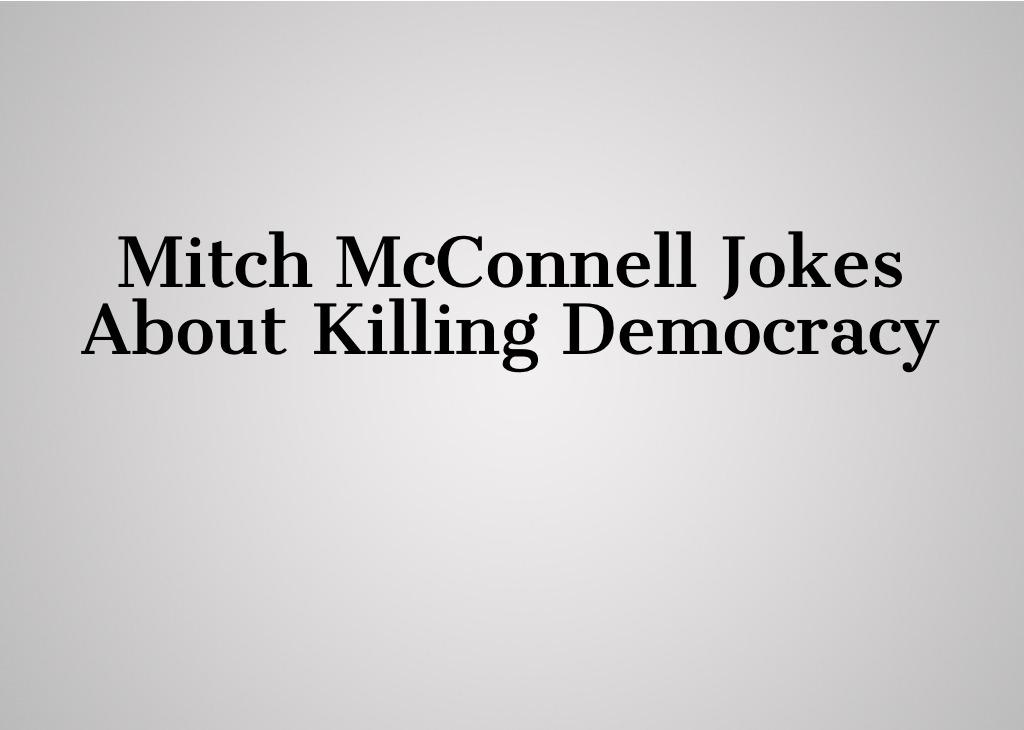 Mitch McConnell Boasts of Being a Democracy Killer

Call your Senators and Demand a Vote on HR1 Now

Mitch McConnell and his cult of corruption cronies are making a mockery of American democracy and today they outright relished in McConnell’s attempts to kill it.

McConnell and the GOP are swimming in a swamp of corporate cash and dirty oligarch money and letting Russia get away with hacking our elections and buying off politicians to the point that our democracy is teetering on the brink of destruction.

And instead of joining with Democrats to protect our democracy, the GOP - led by McConnell and Trump (aka Putin) - are brazenly embracing corruption.

When Democrats took control of the House earlier this year, one of the first things they did was to keep their promise to the American people and unanimously passed a sweeping anti-corruption package of legislation - H.R. 1 the For the People Act. The legislation will force so called “dark money” groups to name their donors and help get money - including foreign money - out of politics. And H.R. 1 includes new restrictions on lobbying, strengthened ethics laws for public officials and much needed election security provisions and voting access.

This week, 62 House Democrats wrote to McConnell urging him to bring H.R. 1 to a vote.

We are not kidding. You cannot make this stuff up. The Senate Majority Leader of the United States of America Tweeted a meme of himself as the Grim Reaper killing the “Bill” from Schoolhouse Rock and killing democracy to a sitting Member of Congress. To boot, Rep. Max Rose (D-NY) -  IS A VETERAN THAT SERVED HIS COUNTRY TO PROTECT OUR DEMOCRACY!

Folks, Democracy is not a joke. It is not fodder for Mitch and his swamp swimming corrupt cronies to joke about killing. They are already letting Trump assault the Constitution.

It is time to fight back. Call your Senators today and demand a vote on anti-corruption H.R. 1.

Send McConnell a message that killing democracy is not something to be celebrated by your campaign - especially when your campaign and affiliated dark money PACs take money from the very same foreign actors that hack our elections.