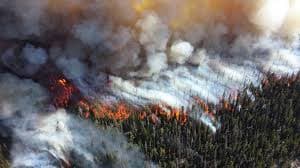 Climate Change to Shave off 3% of Global Economy

CNBC Reports: Climate change could shave off 3% of the world economy, study finds

In addition to the warming earth and natural disasters, climate change could take off a total of 3% of the world economy within the next 30 years.

Despite the US being the world's largest economy, it would not escape the impacts of climate change.

The U.S. could see its growth rate reduced by more than 1% over the next three decades as a result of climate change. The National Bureau of Economic Research had highlighted in August that growth per capita in the U.S. could shrink by 10.5% over the next 81 years amid expected higher temperatures across the globe.

The Trump administration has ignored this report of economic loss and has continued to move forward with withdrawing from the Paris agreement.