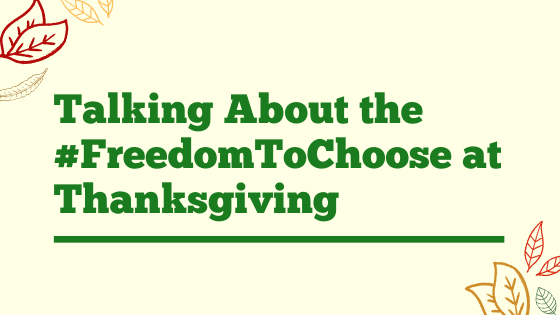 How to Talk about the #FreedomToChoose at Thanksgiving

Let us know how you tackle difficult conversations at family holidays

NARAL Reports: How to Talk About Reproductive Freedom with Your Anti-Choice Family Members at Thanksgiving

Seven in 10 Americans believe abortion should remain legal and accessible — that’s not just a majority, that’s consensus, and it’s true in red, blue, and purple states. This is even true across geography, age, and ethnicity. A majority of Independents and Republicans also support legal access to abortion, regardless of whether they would choose abortion themselves or identify as pro-life. It’s not about whether or not abortion is the right choice for them personally, it’s about not wanting politicians to decide.

The majority of women who choose abortion are mothers already who are just trying to take care of the families they already have. Access to contraception and abortion care helps a woman achieve her educational and career goals. The ability to delay having a child if she chooses can lead to a more stable income than that of her peers who were unable to delay a pregnancy until the time was right. This helps build stronger families that can be more resilient in times of economic downturn. Some may not see how abortion access is tied to economic well-being, but when it comes to the lived experience of women and families across the country, there is no debate.

This year, we all watched as the Trump administration ripped children out of their loving parents’ arms at the border while seeking asylum. Thousands of children have been separated from their families, while the administration has no plans for reuniting many of them. Family separation is the latest in a long line of examples of the “pro-life” hypocrisy we’ve seen from the GOP. As we all sit here with our loved ones today, what’s happening to these families feels inhumane, and the opposite of “pro-life” or family values.

Our country has also learned about the long-term damage that sexual violence often does to victims, and the effects on families, workplaces, and communities. So many men and women are rising up and making their voices heard in order to shed a light on injustices that have gone on for years...Yes, this has led to specific people being held accountable, but...it’s important to have honest conversations about the right way to treat everyone, including men and women. We must respect everyone’s lived experiences and the fact that their stories are their own.