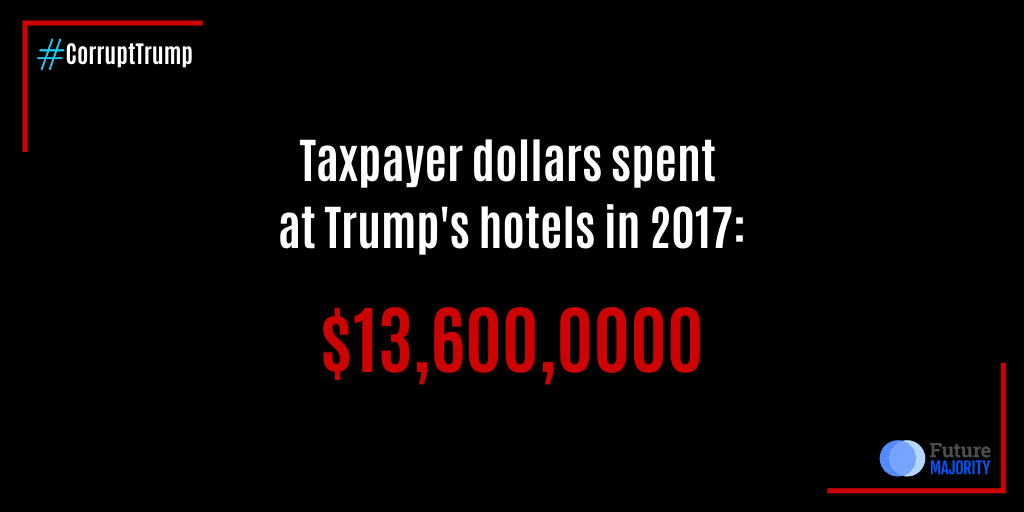 Will you share Trump's corruption with your social media?

Vanity Fair Reports: Why Has the Trump Organization Been Gouging the Secret Service? Dems Would Sure Like to Know

Trump continues to waste taxpayer dollars in order to line his own pockets. A recent investigation shows that the Trump organization charged Trump's security details $650 a night to stay his properties. He also charged the Secret Service $17,000 a month to stay at the Trump National Gold Club, which is "an unusually high rent for homes in that area."

To top it all off, the Trump administration tried to convince people that his government entourage stay at his properties for free. Something here is not lining up.

A few members of Congress are just as puzzled as we are by these exorbitant fees:

In a letter to Secret Service Director James Murray, House Oversight and Reform Committee Chairwoman Carolyn Maloney (D-N.Y.) and Rep. Jackie Speier (D-Calif.) asked for records of payments to Trump properties and any contracts between the Secret Service and the Trump Organization. “The payment of rates far above government rates and the Trump Administration’s lack of transparency raise serious concerns about the use of taxpayer dollars and raise questions about government spending at other Trump properties,” Maloney and Speier wrote in the letter. “These concerns are heightened since President Trump has spent a third of his presidency at his private clubs and hotels, and his Treasury Secretary has attempted to shield Secret Service expenses from public scrutiny.” ADVERTISEMENT A January 2019 report by the Government Accountability Office found that federal agencies spent about $13.6 million over four of Trump's trips to Mar-a-Lago between February and March 2017. That included $10.6 million for operating government aircraft and boats, as well as $3 million for personnel expenses like transportation, lodging, and meals. Maloney and Speier further noted that the Secret Service has not disclosed the full scope of its payments to Trump’s businesses or the cost of travel to his properties by not regularly submitting semiannual reports on expenditures to protect the president. They said that the agency had only provided the three most recent reports and asked for an estimate of when it would submit the full set of reports documenting costs in the Trump presidency.

The corruption is never ending. Will you share this article on social to let Americans know of the White House's corruption?