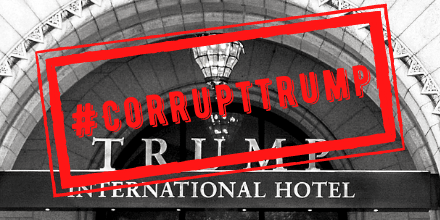 We all know that Donald Trump has used his presidency as a way to line his pockets. So much so that there is currently a lawsuit accusing Trump of profiting off the presidency through payments by foreign governments and domestic states to his hotel in Washington, DC.

But a court of appeals recently voted 9-6 to reject Trump's bid to block the lawsuit.

The lawsuit alleged violations of the constitution's "emoluments" clauses - rarely tested in courts - that ban a president from accepting gifts or payments from foreign governments without congressional consent. The plaintiffs seek a court order directing the president to divest himself of his interest in the Trump International Hotel.

Saudi Arabia, Kuwait, and Bahrain are just a few of the foreign governments that have booked rooms and events at Trump's hotel since he was elected as president.

The Fourth Circuit judges split along ideological lines with Democratic appointees turning down Trump's attempt to halt fact-finding ordered by a lower US court and Republican-appointed judges siding with Trump.

We need to stop Trump's corruption in its tracks.