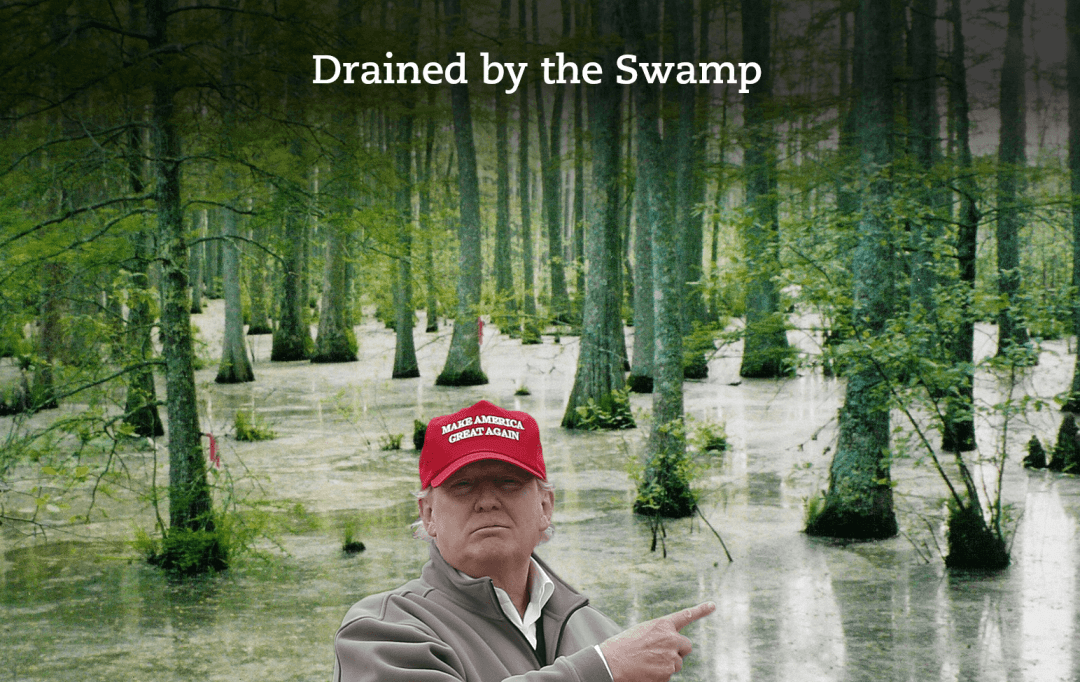 Trump couldn't drain the swamp, so he became the swamp.

NYT: Trump Vowed to ‘Drain the Swamp,’ but Lobbyists Are Helping Run His Campaign

While running for President, Trump vowed to Drain the Swamp of lobbyists:

With Mr. Trump lagging in the polls, the lobbyists are seeking to protect that mutually beneficial relationship by working to re-elect him, underscoring the mix of politics and policy that has served them — and their clients — so well over the last three and a half years.

Lobbyists from blue-chip companies such as Raytheon are now fundraising and working to re-elect Trump because they know Trump will work with them:

Consider the examples of eight lobbyists and operatives with ties to lobbying firms, including Mr. Urban, who are now assisting Mr. Trump’s campaign in various paid and unpaid capacities, like fund-raising and strategy.

Those eight have been paid a total of nearly $120 million through their firms to influence the United States government from the beginning of 2017, as Mr. Trump prepared to take office, to the end of March, according to an analysis of congressional and Justice Department filings.

Furthermore, lobbyists can even be found in leadership in the Trump campaign:

They include Corey Lewandowski, Mr. Trump’s initial campaign manager in 2016. Mr. Lewandowski has not registered as a lobbyist, despite advising companies with issues before the administration and also reports that he has worked with a lobbying firm founded in part by Jason Osborne, a former Trump 2016 campaign aide who has raised at least $360,000 for Mr. Trump’s re-election campaign.

Also recently added to the campaign team was Jason Miller, who set up meetings in 2017 for Wall Street executives with cabinet officials, and briefly registered this year as a lobbyist for other companies before joining the campaign’s payroll.

With big time lobbyists funding and leading his campaign, #CorruptTrump has no desire to rid the swamp. In fact, he's maintaining transactional relationships with lobbyists to get them what they want and to get himself re-elected.