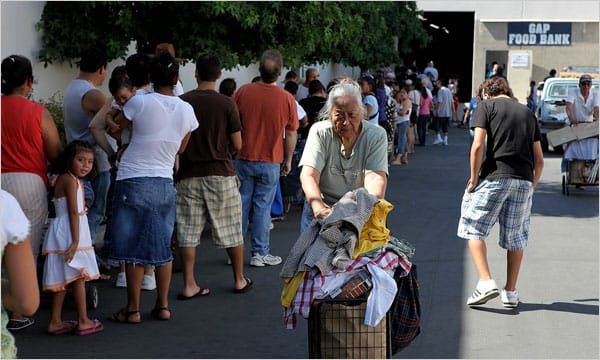 Millions of Americans are hungry and poverty-stricken. Where is their support?

Contact your Senators now and tell them to pass the HEROES Act.

The Washington Post Reports: Debt, eviction and hunger: Millions fall back into crisis as stimulus and safety nets vanish

COVID-19 has drastically impacted the lives of all Americans but especially low-income earners. The current economic state warranted government intervention - $600 a week unemployment benefits and $1,200 stimulus checks. But what many poverty experts found was that these benefits actually lowered the poverty rate. In fact, without the benefits, 17 million people would have dropped below the poverty line.

Now, data show, those gains are eroding as federal inaction deprives Americans on the financial margins of additional support. If the unemployment rate stays around 10 percent and no new stimulus is delivered, “we can expect poverty rates to rise and climb higher than those observed in the Great Recession,” Parolin said. The poverty threshold for a family of four is $26,200, according to the U.S. Department of Health and Human Services.

Now, many Americans are once again struggling. For the week of July 21st, almost 29 million US adults stated that their household sometimes or often didn't have enough food for the next seven days.

Bruce Meyer, a University of Chicago professor who studies poverty and inequality, said the Cares Act stimulus package more than offset lost earnings for many low-wage earners. This helped lower the nation’s poverty rate in April and May, when it was projected to spike after the pandemic set off widespread job losses.

Americans need help now. We need to pass the HEROES Act and provide Americans with the benefits they need to survive. Call your Senators now.