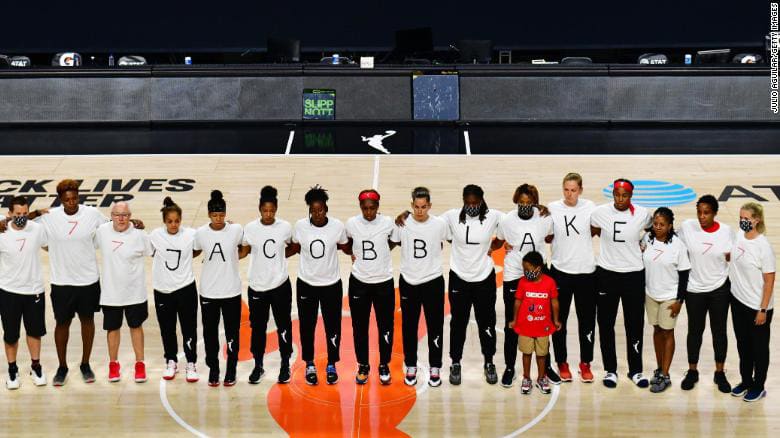 CNN: These are the teams and athletes who refused to play in protest of the Jacob Blake shooting

After the shooting of Jacob Blake, protestors took to the streets all around the nation -- but now it's extending to professional sports players:

Across the sports world, athletes took a stand for Black Lives Matter on Wednesday night by holding an unprecedented wildcat strike and refusing to play their regularly scheduled games.

It started with the Milwaukee bucks, a team who withdrew from the playoffs in boycott:

The decision started with the NBA's Milwaukee Bucks and stemmed from the police killing of Jacob Blake in Kenosha, Wisconsin, on Sunday. The stand quickly spread across a number of sports and even into the broadcast booth, where TNT's "Inside the NBA" analyst Kenny Smith took off his mic and walked off stage.

Strikes are banned under the NBA's collective bargaining agreement, which means the Bucks players broke their own contract in order to protest racial injustice and police violence.

In a statement issued on Wednesday afternoon, the Bucks players said they are "calling for justice for Jacob Blake and demand the officers be held accountable. "

Moreover, teams within the MLB, NHL and even Tennis Star Naomi Osaka withdrew from a tennis semifinal in protest for social justice:

Tennis superstar Naomi Osaka announced on social media that she will not play in the Western & Southern Open semifinals on Thursday.

"Watching the continued genocide of Black people at the hand of the police is honestly making me sick to my stomach," she wrote.

Enough is enough -- and leaders across all spectrums are making it loud and proud.