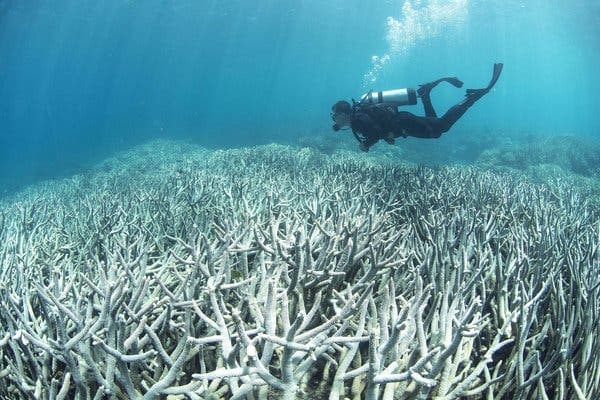 The New York Times Reports: The Great Barrier Reef Has Lost Half Its Corals

The Great Barrier Reef is an essential part of our earth's ecosystem with one of the most precious habitats. Now, the reef has lost half of its coral populations within the last century. Researchers say this decline will continue unless there is drastic action taken to mitigate the impacts of climate change.

These results were found in a study conducted between 1995 and 2017.

“Our results show the ability of the Great Barrier Reef to recover — its resilience — is compromised compared to the past, because there are fewer babies, and fewer large breeding adults,” Dr. Andy Dietzel, the lead author of the study, said in a statement.

The reef has experienced massive amounts of bleaching, a process in which coral expel algae and turn white as water temperatures rise. This has contributed to a massive increase in coral colony losses in the northern and central Great Barrier Reef. The souther part of the reef also experienced record-setting high temperatures in early 2020.

“We used to think the Great Barrier Reef is protected by its sheer size — but our results show that even the world’s largest and relatively well-protected reef system is increasingly compromised and in decline,” one of the researchers, Terence Hughes, said in a statement.

The Great Barrier Reef supports a vast array of marine life, with 300 to 400 coral species that stretch for miles.

We need climate action now before it's too late.