How Capitalism Can Work for All Americans

We must reframe the debate, it is not about Capitalism vs Socialism.

Many things that have been framed as “Costs to be reduced” are in fact critical “Investments that yield huge returns” which make us stronger.

Markets are critical, but incomplete. Markets on their own do not provide: 1) Strategic Investments that empower all citizens, 2) Regulation to ensure robust levels of competition, and health and safety.

A few decades ago, we began to sharply cut the investments that fueled a smarter version of capitalism - investments in students and workers, in the infrastructure and networks that integrate the economy, and in the basic research that ultimately drives innovation.

As a result, in last 20 years workers’ incomes have stagnated, the middle class has been shrinking, infrastructure has deteriorated, public schools and teachers have been underfunded, workers in dying industries have not been retrained, and the number of small and family-owned businesses has plummeted.

We now have an economy that concentrates more and more benefits on the top 10% of earners in industry after industry - reducing competition, social cohesion, and the overall strength of our nation. We simply stopped investing in 90% of our fellow citizens, and the consequences for the overall health of our society are devastating.

Debate over income injustice in America has devolved into a shouting match between “socialism” vs. “free markets,” when in fact neither can solve the problem:

With socialism, the focus on government takeover of industries to create more “equality” doesn’t mean workers get paid more – which is what they really want and need.

With free market theory, the idea that benefits “trickle down” automatically to the bottom 90% has proven false when strategic investments and common-sense regulations are missing.

There are well understood reasons why markets, without help, fail to live up to what free-marketers promise.

First, it’s not in the interest of individual companies to make investments whose benefits extend beyond those companies – basic research, infrastructure, schools. Government is expected to make those investments, but in the last few decades, government investment in these areas of “public good” has plummeted.

Second, markets inevitably favor the big over the small, and without government as a referee they tend to reduce competition, leading to the kinds of abuses prevalent when Teddy Roosevelt took on the Trusts 120 years ago. No one wants to return to the days when “free markets” meant monopolies and oligopolies, sixteen-hour work days, and child labor. Thriving competition makes capitalism – and America – stronger.

Smart Capitalism can be defined by three concepts:

1. INVEST IN ALL AMERICANS. If Capitalism is driven by investment, then we must invest in all Americans, not just the top 10%, and not just because it’s fair or right, but because our economy and society will reap enormous returns on that investment.

2. INVESTMENTS ARE NOT THE SAME AS COSTS. Investments yield returns; costs do not. Smart Capitalism seeks to increase investment while reducing costs.

3. SMART CAPITALISM; SMART GOVERNMENT. Government is not the enemy of capitalism, but its necessary partner -- as a referee to ensure competition, and to protect public goods such as clean air and water, so that the benefits of capitalism extend to all.

This isn’t some untested theory; it’s what we used to do and how we became so successful as a nation. If you look at 1965, America had many problems, but its economy was the wonder of the world. Income for working people was rising faster than for corporate executives, our infrastructure and public education system were second to none. The GI Bill, the highway system, intense and highly regulated competition in American industry all created enough mobility and opportunity to spawn the greatest middle class in history.

Here are some of the investments we need to make today in order for capitalism to again reap returns for everyone:

Education - America once led the way with K-12 education for all. It gave us the best educated, and most productive workforce the world had ever seen. This wasn’t a “cost” - in fact it generated a huge return and made us strong.

Infrastructure - The physical infrastructure of our roads, bridges, trains, subways, airports, water systems, energy grids all need massive upgrading. Renewed infrastructure will make it easier to create economic value across all industries and for businesses large and small. And, since we now live in the Information Age, we need to invest in digital infrastructure as well. A century ago, Americans decided all citizens needed to be on the electric grid -- even those in rural areas – and that investment paid huge dividends, creating opportunity for all, making it easier for companies to do business everywhere, and enhancing social cohesion. Today’s equivalent is high speed bandwidth, and investing in 100% access to this modern opportunity life-line will pay huge dividends once again.

Research & Development - The computer chip, the internet, global positioning satellites, vaccines, many life-saving drugs and medical devices came about because of US government investment in basic science research. The return on this has been so large, so world changing, that it is hard to even calculate. Yet, we have significantly decreased R&D investment as a percentage of our economy. In the private sector, when you find great investments that generate huge returns you look to do more of them, not less. It’s time to put the government back in the research business, or we will soon find America’s century-long domination in technology and innovation eclipsed by our ever-strengthening world-wide competitors.

Health Care – This category is often seen in terms of cost, but it’s very much an investment. Consider: By broadening access and increasing portability of health care, we will increase our productivity and economic mobility, while at the same time decrease basic costs via scale efficiencies. When corporations invest in proper health insurance for their employees, they view it as an investment in company competitiveness - employees that are healthier, and also don’t have to worry about going bankrupt from an unforeseen family health issue, are more productive. It’s time for our country to realize the full return that is possible from broad access to health care.

Energy - Arguments over climate change and its costs have obscured the opportunities inherent in new forms of energy. The old energy paradigm served our country well, and itself benefited from government investments and regulation when it was key to our economic growth. But we face a new future now, one that will need new forms of energy that are not only healthier for our planet but cheaper, more decentralized, and inexhaustible compared to carbon based energies. The very pursuit of this will create new industries and better paying jobs. This future is coming, but there is no need for it to be defined by suffering and deprivation. On the contrary, if we have the foresight and the will, we can once again lead the world in energy innovation. The details of how best to achieve that are a matter for healthy discussion, debate and research, but what is clear is the right general direction - forward.

Labor and Capital - Here’s a chart that shows the alignment we used to have between Labor and Capital during the period where we grew consistently stronger as a nation (1945-85), the huge misalignment that has occurred as we invested more in the top 10% of earners, and less and less in the other 90% (1985-today). 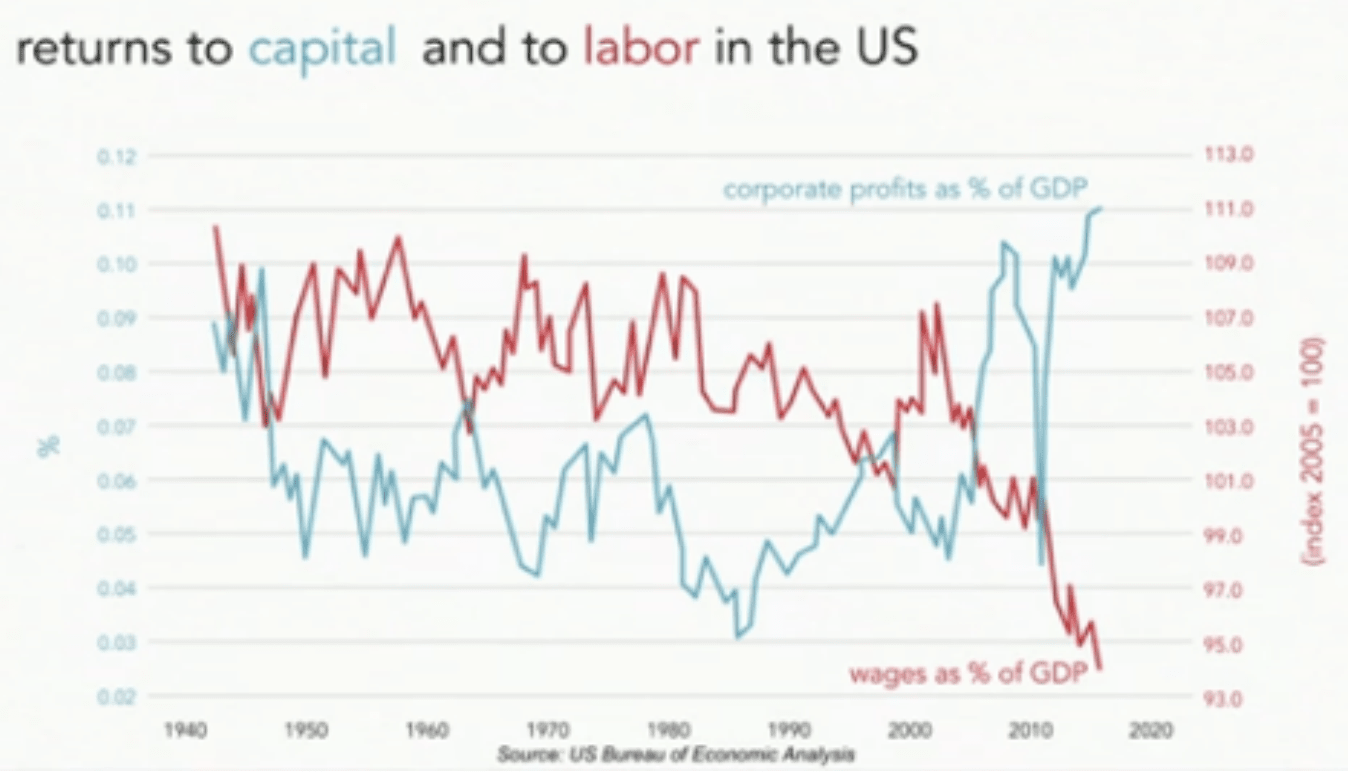 Ending income stagnation is essential for the future of our country. We must agree that companies have a responsibility to the well-being of our nation as well as their own bottom-line. If corporations insist on using profits to buy back stock or increase executive compensation instead of paying workers more, we must find remedies: impose higher minimum wages and increased worker benefits on large companies while allowing small companies to thrive on a more level playing field, mandate corporate board seats for labor representatives, erase the income cap on Payroll Tax while lowering the rate (the equivalent of a raise for low and middle income workers), etc.

The point of Smart Capitalism is not altruism, but rather the understanding that higher paid workers mean a growing economy, more consumer spending, a broader tax base, more workers willing and able to innovate, better health outcomes, a better educated citizenry, and more cohesive communities. America simply does better when its workers (and their families) are better paid, better prepared, better treated, and more aligned with reaping the fruits of America’s success. America was able to lead the world in freedom due to our strength, and we can do it again in the decades to come.

How Much Investment Can We Support? Smart Capitalism would not simply mean more government spending - socialism in sheep’s clothing - but rather a change in national priorities: the value of investing in the people and fabric of our nation would become more evident.

Many of the massive investments called for by Smart Capitalism will demand new ways of raising money. The Stock Market and financial sector have made bonds less attractive than they were during World War II (when they were key to financing war production). But bonds – citizens voluntarily lending the government money – are one good way to pay for huge public investments, and tax laws should be changed to make them more attractive. Public/private partnerships also played a greater part in past development, and should be expanded. The oft-contemplated Infrastructure Bank should finally be implemented. And government should reap equity-style returns from companies that benefit from government-funded research and IP, and which can help pay for future strategic investments in R&D.

Local economies would also play a bigger role if they were given a chance to compete with the giant corporations that now hold sway. Across America, towns and cities are already leading the way in community development and energy innovation, experimenting with new ways of renewing their aging Main Streets. Not every business or worker needs to compete on a global scale: small and family-owned businesses have always been the bedrock of the American economy, yet now Canada has a higher rate of start-ups than the United States. We need to make it easier for more Americans to invest in themselves.

At least some new taxation will be necessary. Several approaches are possible: higher marginal rates, equalize capital gains and income tax rates, eliminate loopholes, data dividends paid by large tech companies, tax externalities such as carbon and pollution, a tax on financial transactions, etc. The issue isn’t about taxing for taxation sake, or trying to diminish success. It is about identifying the lowest cost ways to fund the strategic investments that will make all Americans stronger.

By a similar measure, sensible regulation is an investment towards enhancing competition and protecting health and safety, so that all Americans can prosper.

Inevitably there will be a limit to the number of investments that can be made at any one time, and the marketplace of ideas will have to decide which goals to prioritize first. But what’s important is the understanding that these are indeed investments, not costs, and that they will yield returns for all of us: a healthier economy and society, more prosperity, freedom, mobility, productivity, innovation, and satisfaction.

No country is better positioned to succeed in the future than the United States; no country has our combination of resources, diversity, and size along with a culture of risk-taking and hard work. Investing in only 10% of our people has weakened us; if we bring the other 90% back into the fold, nothing can stop us from leading the world into a future of prosperity and freedom.